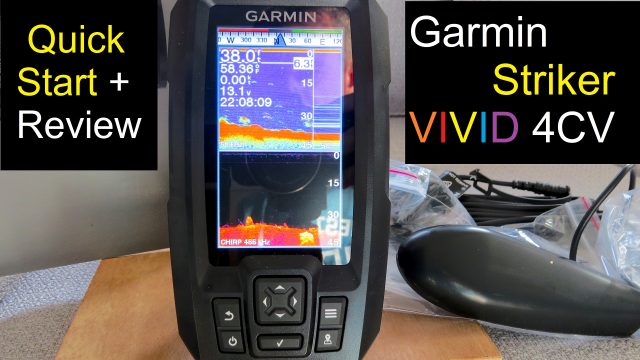 Updated on July 5, 2021 with the 3rd video, showing how to create waypoints and routes from Google Maps (please scroll down)

For 2021, Garmin has once again made improvements to their budget 4 series and 5 series STRIKER fishfinders with their new Striker VIVID 4cv and Strikjer VIVID 5cv. The 7 and 9 series also get VIVID colors, but as they are not exactly budget models, we not be reviewing here. The new models feature the nine new VIVID palettes in the ClearVü screen only. Other than that there is not much new from the older 4cv plus and 5cv. However, the new models come with a GT-20 transducer included, rather that the CV-20. The GT-20 transducer is arguably better that the double beam CV-20, and was seen as an upgrade on earlier models. Other than that, there is little else over the previous model.

We have some hands on review videos of the VIVID 4cv below. There are also some videos on our Amazon Video Channel. For the purpose of this review, I will quote the 4 series, as I have it here on hand. The screen is 4.3″ diagonal (not 4″ as some advertise as). That is 272 X 480 pixels which translates to QSVGA video quality. I found the unit bright and easy to see even in direct sunlight. The VIVID 4cv weighs just 0.7 pounds (0.3kg) and the quality of the plastic feels very durable. The output of this unit is 300w RMS, compared to the 200w from the standard STRIKER™ 4. The STRIKER™ VIVID 4cv has dual frequency and dual beam capability. You can actually have a split screen with a different frequency in each ‘window’ (ie 50 and 200 kHz) in the ‘traditional’ mode. The ClearVü mode has the choice of 260 kHz, 455 kHz or 800 kHz. Of course you can have both Traditional and ClearVü at the same time in split screen.

Below is the first review video covering unboxing and setup:

Where this unit and the other ClearVü units stand out among the crowd, is their ability to create a contour map of the ocean floor as you sail up and down. This mapmaking ability is called ‘Quickdraw’. You basically just press a button and sail around the place. The areas already covered will be marked as so on the map. Note: In places with tides, such as open sea, you should scan during zero tides, or adjust depth to match in the settings. Non CV models such as the original STRIKER™ 4 and STRIKER™ 4 plus do not have quickdraw.

Here in our second video, we deal with home screen, basic settings of each mode including split screen:

You can also set up waypoints such as ‘Home’ or obstacles, and there are built in many symbols to represent these, along with the ability to name them. You can save up to 5,000 map waypoints, 50 tracks, and 100 routes. You can also set up waypoints with coordinates in the comfort of your living room using Google Maps or other electronic mapping. We will deal with waypoints, tracks, and routes in the final video. We will also explain about quickdraw contour mapping.

What’s in the box?

“Vivid brings an enhanced sonar experience to the STRIKER series,” said Dan Bartel, Garmin vice president of global consumer sales. “There are a lot of variables to consider when choosing a sonar color palette – daylight, bottom composition, cover, even eyesight – and we’re excited to bring more choices in vivid colors to these popular fishfinders so anglers can have more success on the water.”

We are a participant in the Amazon Services LLC Associates Program, an affiliate advertising program designed to provide a means for us to earn fees by linking to Amazon.com and affiliated sites

Newsmag is your news, entertainment, music fashion website. We provide you with the latest breaking news and videos straight from the entertainment industry.